NCMF is searching for a new Chief Development Officer! This is a great opportunity to help a foundation that has been supporting Masonic charities for almost 100 years! Interested in helping kids in trouble and seniors in need of services and housing? Check this out!

Fraternal Friendship Program brings Masonic charity home
The Masonic widow didn’t know where to turn. Her husband had passed, she had no money … and a mortgage to pay off that she had not known about.
The brother was at wit’s end. His cancer was gone but the huge bills were not. How was he going to handle this and not lose his house? Another brother who suffered a debilitating stroke and lost his leg was denied disability. Who could he turn to for help in appealing a very bad decision? Who could he turn to? Who in the world would be willing to take his troubles on and help him out of a terrible fix? His fraternal brothers and sisters, of course.
Visit Link

Ready, set go: Virtual run dates announced
Get your running (or walking) shoes ready for the second annual Grand Master’s Run, set for this fall. This statewide virtual event – with some cool new rewards for your participation
this year! – honors our outgoing Grand Master and welcomes the new. The run begins Sept. 24 with the opening of Annual Communication and runs through Dec. 4, the date of installation of our next Grand Master.
Visit Link 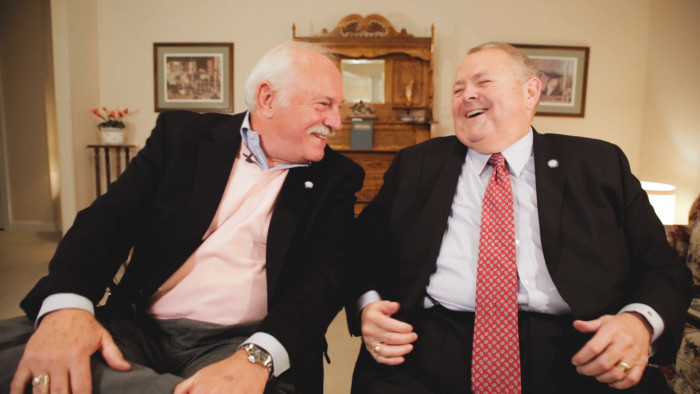 Fathers and sons, sisters and brothers. Taking care of those we love and who need us is a bond that can never be broken. This is what Masonry is all about. Support the Campaign for WhiteStone!

It has never been more important for Masons to honor the promise they made at the altar to support widows and orphans through their Masonic charities. Join the NC Masonic Foundation and meet some folks whose lives were changed by your generosity!

To read the latest issue of the NC Mason, click below.